We recently have been taking care of a cat that was not spayed yet. The dear female cat was in heat. She is normally already really cuddly, but now she was even more cuddly than ever before. She was not to go out as she would get male cats on her. The owner wasn’t too pleased to get a nest of kittens. There are as many benefits of spaying or neutering your cat as there are myths about not doing so.

So we took care of this female cat of less than a year old. The house got the cat’s smell everywhere, for she started to mark around the house that she was in heat and really badly wanted to have a male cat as company.

If you thought only male cats spray and mark territory you are wrong. We’ve seen all our female spayed cats spray for marking territory.

We fed her everyday and cleaned the mess she made. We noticed she barely ate anything between the visits and was continuously rolling over the floor. We felt really sorry for her.

Even though all our dear kitties are neutered/spayed we still call them by their original gender, simply because they are family members and all have their own distinctive behaviour.

Spaying is the removal of the uterus and ovaries by the female cat. This is a rather complicated operation that requires an incision in the lower abdomen. We’ve filmed it once at a veterinary clinic for one of our RSPCA cats.

Although it is technically possible to do this type of operation on a cat of every age, veterinaries prefer to do this not before the cat has become 6-12 months old. Not because of any form of early stress to a cats body, but because a young cat has very tiny ovaries – it becomes microscopic work.

Neutering is a much simpler operation of removing the balls from a male cat. As male cat’s balls are on the outside of the body, this type of operation doesn’t take much time at all and is also relatively much cheaper.

There has been much discussion in the past whether you should wait or not wait with these procedures. Even if there is any proof that it is better for the cat to wait a little longer with the operation, it is usually not beneficial for yourself to have a cat spraying around your property or have an early nest of kittens.

There are many myths among people to not neuter or spay their cat. This is than also the reason we got high numbers of stray cats.

All cats are carnivores. They eat meat. We cannot feed our cats vegetables because their digestive system cannot tackle that. Their hunting is instinctive, they will therefore always look for mice, rats, birds, sometimes even rabbits and squirrels. All our cats are neutered / spayed and are still amazing bird and mice hunters.

Myth #2 – There are no non-neutered cats where I live

Perhaps there are no non-neutered male cats directly where you live. But the males that aren’t neutered yet, will generally look around and travel far for their female to impregnate. The females on their turn will make sure to spread her smell, because she wants to get kittens. It is a very natural and instinctive process.

All cats get general anesthetics by most things done at a veterinary clinic. Whether that is neutering / spaying or a blood test. It is generally easier to fiddle about with a cat that way.

All cats can also get a pain killer injection after the procedure has been completed. Additionally you can get pain killers on prescription for your cat, but do know that cats have a rather high pain toleration.

I believe that a non-spayed / non-neutered cat suffers greater from the constant instinctive need to reproduce, than from a relatively small operation that your cat won’t feel anything off and will provide a better quality-of-life in the long run.

Cat’s reproductive story is a completely instinctive behaviour. When the season is there, their need to reproduce is huge. After removing the tools for that, that need pretty much disappears from their possibilities.

They will be able to focus on different things in their cat lives. They will go hunting, playing, sleeping and exploring.

No, I would say that your (male) cat suffers more from not being neutered, because he will end up in fights with other male cats. He might be running off in search for a lady and then the chance for getting taken by traffic or predators is bigger as well as obtaining cat AIDS/FIV.

Not spaying your (female) cat, means she is continuously in heat and doesn’t do anything else than asking for an answer to her continuous calls.

Myth #5 – My cat will become less active and overweight

Cats are very mindful beings. When they do not have the urge to reproduce, they will put their time and effort into other things that ‘interest’ them. Hunting mice and birds, or generally everything that moves, is still their hobby.

Cats love to play and hunt, whether that is in your garden or with toys inside your house. They do however need the stimulation to move. If nothing in the house moves, than they will not likely come into action. If your cat is an indoor cat, you will have to simulate their natural habitat – the outdoors – inside your home.

Cats that have less activity also need less food, or at least food with less calories. Calories in – calories out is just as much valid for your dear cat as it is for yourself.

Choose the right type of food for your cat and follow the proportions for your cat’s breed, age and weight. 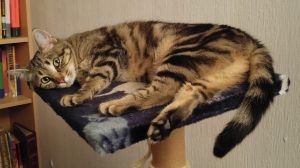 Although that is technically a possibility, you though have to keep a really close watch on your female cat. Besides the awful smells you will get in your house that are difficult to clean and the constant singing choir that will make you go nuts, the chance that you will not know that she is on heat next while she is outside is really big.

Female cats are almost continuously in heat in the spring and summer season. And non-neutered male’s will come from afar to her answer her call.

She will stay in heat (or a loop of heats) until she either has mated with a male cat or when her body thinks she has mated.

Female cats, also known as Queen’s, have a high chance to become pregnant.

The latter is a rather difficult procedure where you need to stimulate the cat’s vulva until she ovulates. If you have managed that, you might get two months of peace before the drama starts over.

The benefits of spaying or neutering your cat are many.

Female cats can be saved harm from often cancerous mammary gland tumors or tumors on the ovaries or uterus.

Male cats will no longer be of risk to develop testicular cancer.

Male cats will reduce their stray behaviour of going after the smells of a nearby lady to make his (or several!). They will also less likely end up in fights with other males.

Female cats will not run away because of a new nest of kittens to give birth to – they generally do so away from humanity. Female cats will instead attract a lot of male strays in the direct environment of your house.

Benefit #3 – Reducing Chances Of Other Diseases

Male cats will as said in the previous point go astray when they are not neutered. They will meet other male cats and fight with them, to get access to the lady. In their fights they might obtain wounds that can lead to infections. They can also obtain FIV (feline aids) or feline leukemia. Neutering a male cat will take (most of) the fight out of them.

You will also remove the chance of developing Pyometra in female cats, a serious infection of the uterus.

On top of that, a cat that is regular in heat is also more prone to obtaining serious diseases because of a lowered immune system.

Male cats are easier to get stressed from other male cats when looking for a lady. Their hormones are acting up and this also makes them more aggressive in their behaviour.

Female cats in heat are acting differently from a cat that wants a belly rub. When they get really desperate, they are not as friendly to your touch.

Benefit #5 – No Illnesses And Complications Due To Birth

Producing off-spring is not without risk. Both mother and babies can suffer illnesses during and right after birth. Continuously producing kittens can be harmful for the mother.

This one I actually do not see as much posted about on the internet, but is even more so important. Just think of a farm with non-neutered and non-spayed cats running around and about. Cats do not see the taboo and potential problems of mating with their own sisters, brothers, son’s, daughters and the like.

Although inbreeding is used by breeders to produce certain expected gene traits, if done wrongly it can cause a lot of unwanted gene defects and make cats more prone to diseases.

Are There Any Disadvantages?

Well, apart from not having those cute kittens running around and about, there are a couple of possible disadvantages to neutering or spaying your cat.

Because of one activity less in their side of the story, your cat could be prone to obesity. With obesity a whole load of different diseases surface. However, with proper food management, you can keep your cat healthy.

A professor of orthopedic surgery believes that early neutering/spaying significantly increases the risk for breaking bones later in life.

Neutering and spaying does not necessarily prevent overpopulation as it takes only one intact female and one intact male to repopulate the population of cats.

Even though overpopulation is not prevented, it is certainly helped a bit. The operation at the clinic is perhaps not cheap, but it is well worth the money for a healthy and happy cat in your life.