Chanel and Fluffy have been with us since September 2016 but have not finally found a new home.

Chanel and Fluffy were part of a family of cats of a total of three plus an owner. Unfortunately the owner passed away and so the animal protection was called. They took all three cats under their care. Two of them, Chanel and Fluffy, were brought to us as we are a foster home.

Chanel and Fluffy were at first very anxious and it took quite a while to accustomized to us. Perhaps this was because they had been neglected for a while, or perhaps they were just anxious about new people to get to know.

They had never been outside either, as they were purely indoor cats. On top of that we got a multicat household, so it isn’t all that easy to get along in one go with all of them.

So at first we had them staying in our bathroom. Chanel was much easier accustomized to us and our environment than Fluffy. It took a good month or two before also Fluffy came out more of her area, still, very skittish though even before she left.

After they matured the bathroom, they stayed mostly in the office of Theresa. They even got their food bowls there. In the hall stood a cat litter box for them, which of course was used by every cat in the house.

Even when they much later became cats of the entire house and sat for hours on the sofa in the living room, they still went upstairs to get their food. For Theresa this was a great opportunity to have company from multiple cats while working on her computer. 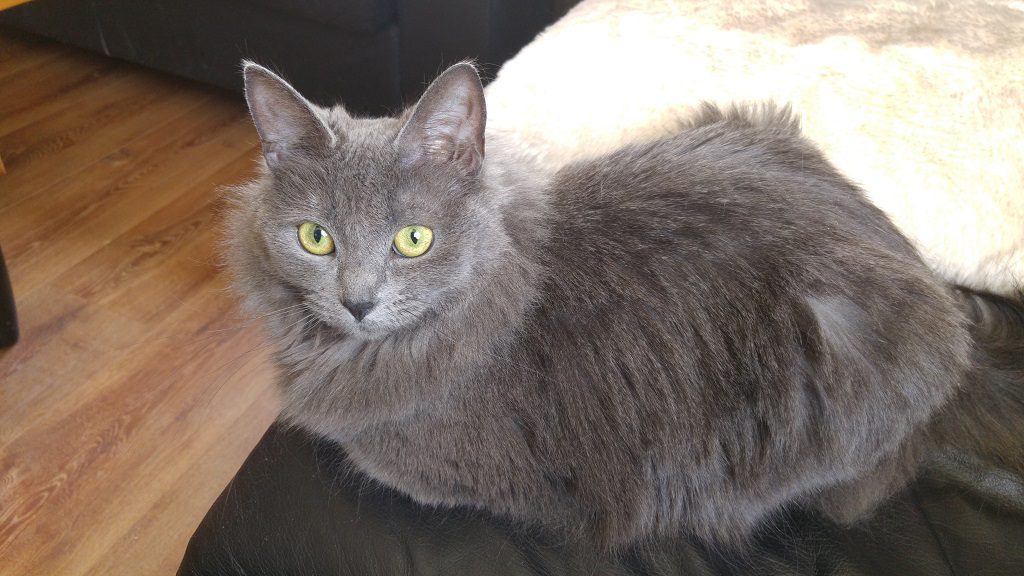 They both had a great time staying with us. Chanel loved the cuddles. Chanel is a very long haired tortoise shell cat. It is noticeable because she is extremely demanding for anything, whether that be cuddles or food. Fluffy is a bit more passive, although she was pretty rough in playing with the others.

A few weeks ago we were contacted by the animal protection services that they had found a new home for the two girls together. The brother of one of the workers there had offered a place for both of them at the same time. Before they could be transported, we needed to take them another time to the vet to do a little health check.

Chanel and Fluffy were already spayed and chipped from before, so that didn’t need to be done. The only thing what was done was a general health check and Chanel got a grooming session by the veterinary. She was not so happy at the vet and went right back into her box, but she was overjoyed when she got back home and settled down again, as that rough fur was now gone. 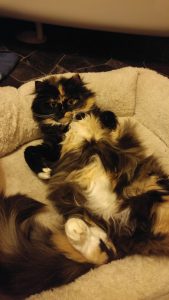 Yesterday Chanel and Fluffy were picked up by the animal protection services and got delivered the same evening to their new home. They settled in nicely and are also cuddling their new owners.

For us it feels however pretty empty. Although we got annoyed by the amount of floating fur, we got quite used to the demanding cuddle requests all around our house or for Theresa in the office. It is pretty silent, even though there are still many cats in our household.

When the animal protection services came around to pick Chanel and Fluffy up, they told us that a new project is awaiting us, a lone kitten.

So we wish Chanel and Fluffy and their new owners a fantastic life onwards! Of course, we hope to receive some pictures of them in the near future of their happy new home.