Cats’ eyes seem to be glowing in the dark, when you come across cats at nighttime, but are they really glowing? We try to answer the often asked question why cats’ eyes glow in the dark.

Cats are nocturnal creatures that are accused for being able to see in the dark. But when you walk or drive in the dark, you sometime can see a cat by two eery eyes glowing away. Why do cats eyes glow in the dark and can they really see in the dark? We will answer this here.

Cats are hunters by instinct. Their type of prey tends to only come out at night or are at least most active during the night.

During the night their prey – mostly rodents such as rats and mice – come out to collect food. At daytime, they are in their holes and nests and sleep most of the time. Birds – also one type of prey for cats – are mostly active during the day.

Nocturnal just means that they are active at night. This is probably also the reason why they are so active at home at night. Our kittens just keep on running up and down the stairs and playing with each other, while we are trying to close our eyes and rest.

Can Cats See In The Dark?

Let’s answer this very shortly to start off with. Cats cannot see in absolute darkness. They still need some light to identify objects and to place themselves in their territory. Even though they can use their other sensory body parts, such as their whiskers, tail and fur, they need a minimal amount of light to be able to see anything.

In your neighbourhood with central street lights, your cat will have more than enough light. In the country side it might be harder, but there always seems to be some form of light by nature. Even if the moon is not directly visible, there might be some reflection of sunlight on the moon, appearing on our earth or in the night sky. With moonlight, they have plenty of light to see in the night. There is however a reason to that they can see so well with so little light.

Why Do Cats’ Eyes Glow In The Dark? 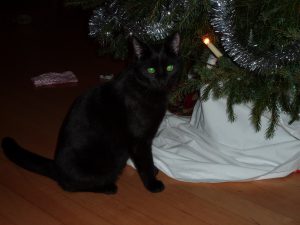 Cat’s eyes have a special layer on the back of their eyeball, called the tapetum lucidum. This special layer is a reflective mirror-like area, that reflects light back onto the retina, to reflect the light back through the eyes.

It is a system in place that makes sure that even the tiniest amount of light will make it possible for a cat (or other nocturnal creature) to see and identify in the middle of the night.

There seem to be some colour differences of glowing eyes between cats. Most cats glow green in the dark, while some glow yellow. The colour has all to do with the pigmentation of the eyes.

The tapetum lucidum is in danger if your cat does not get enough Taurine. Taurine is naturally found in prey they kill, but not naturally in cat food. Cat food manufacturers add enough Taurine to their food nowadays to prevent any form of taurine and amino acid deficiency. If you happen to make your own food at home, it is best to figure out how you can add taurine to the mix, because cats are dependent on this.

Did you know this about cats? Ever seen those glowing eyes in the dark? Are you careful while driving at night? Share your comments below.