This summer seems to be one of the highest high seasons for bug and fly squatting behaviour in our cat colony. Why Do Cats Eat Flies? Are flies extra nutrition or are cats simply annoyed with their noise? Let’s take a look.

Our cats are not too bothered whether it is a fly, a bug, a mosquito, nor a spider or even an ant. Everything that moves is interesting. Everything that moves needs to be played with or maybe just be stopped from moving. Our cats poke all sorts of ants and bugs into place and pounce it to death or try to pick it up with their claws to consume them.

Creatures that cannot be punched, need to be jumped. It seems like they are playing with the creatures, but the creatures unfortunately don’t survive the hard-play of your cats – usually. The next moment they get eaten – alive or dead it won’t matter to them. 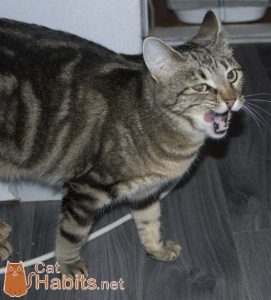 Why Do Cats Eat Flies?

Cats eat flies, among other insects, because it becomes part of their play-hunt activity. They do this both indoors and outdoors. Hunting is however only one part of the story. Hunting the creature means capturing it and most likely killing it. Now that we have established the ground rule of why they do this, there still remains the question of why they would eat it.

Not all hunted prey is killed and not all killed prey is eaten. Strangely enough sometimes cats do hunt for the game or for training, while they have no or little interest in actually eating their freshly caught snack.

It isn’t regular that cats store food for later, so in play it is just that – essentially a waste of resources. Luckily there are bugs that take care of waste in nature, we humans need to dispose of the prey elsewhere.

Flies however are usually consumed by the kitties we know, so what is the reason for that? It is quite simple really. All these bugs are a delicacy for them (and for some humans on the planet even so) and contain mostly meat-protein. You could say that these bugs are like our potato-chip snacks or popcorn. An even better comparison would be beef-jerky, because cats are carnivores and eat solely meat-based protein to survive and thrive. Bugs do give exactly that, a bit of extra meat.

According to a feline nutrition expert, bugs can make up to a third of the daily intake of a (jungle) wildcat or a domestic house cat. The occasional fly, bug or other insect could be seen as a bag of potato chips for us humans.

Is It Dangerous To Eat Flies?

I cannot answer this question for every country in the world or every cat in the world, because countries (and cats) are so extremely different. Here in Europe, most bugs and insects in the house are not dangerous to your cat.

Cats do not eat what they consider poisonous or non-tasty. Even tasting something that is poisonous usually smells or tastes bad and they will get rid of it straight away and not eat it up.

In Australia, you have far more dangers for both humans and cats than in Europe. I cannot speak for other countries. The same story goes for what type of cats you got. There are cats that are more susceptible to eating certain bugs than others. Older cats and young kittens are also more susceptible than the average adult cat.

There are bugs that are poisonous to cats that do not exist where we live, such as the love bugs or the fireflies. The stinkbug contains toxic secretions that can cause mild forms of illness. While the stinkbug can make your cat drool and have digestive issues, fireflies and love bugs can cause severe intestinal problems.

Bugs with a rather hard exoskeleton are also more difficult for the digestive system to deal with and will usually end up being vomited. Certain bugs or bug scales could give a blockage to a cat, that can cause choking behaviour.

The more usual type of bug or fly we got in Europe are the bee and wasp. Bees and Wasps can sting your cat and this can be a very swollen experience for them. Depending on the type of wasp or bee and the amount of stings your cat has gotten, you might or might not want to go to the veterinary.

In Australia, eating a widow spider for dinner can be potentially dangerous to your cat, as the widow spider is a rather deadly spider to anyone.

If you happen to live in an area where snakes are active you got yet another thing to watch for. We got the Adder in Norway which has caused a lot of troubles lately for us. Our cat Kira got bitten most likely by one. She was treated for it. Nusse was playing with a snake the other day – luckily she wasn’t bitten by one, as this could potentially be deadly.

As I said, there are exceptions to every rule as always. Kittens should be more careful than adult cats with the amounts of possible poisons a fly or bug could have and end up in the cat’s body.

There is yet another way to ingest poisonous substances for your cat and that is through the ingestion of pesticides. It doesn’t have to be you spraying pesticidesor installing pest control boxes – even if neighbours nearby or far away do so, your cat could potentially ingest the pesticides.

For example the ant takes the pesticide with into their nest for all to feast upon. It will kill them all. Any ants running back out of the area that get eaten by a cat, could potentially be dangerous to your cat. Perhaps the ant pesticides are just going to cause your cat a funny stomach, but if you think about pesticides against rats – these are really deadly to a cat too.

Does your cat also crunch and munch away on different flies and insects? Please share your experiences below.