Can cats open doors themselves? It appears that some cats have figured out the human mechanisms that belong to doors, cupboards and windows. We got actual proof of a cat that can open doors.

Some mechanisms of windows or doors that already are open is too easy for a cat. The most common thing you will see is that cats open doors or windows by a simple push. They will use their body for that, with the lack of hands. Usually a head bonk is enough to open a cat flap, an already opened door or a window. 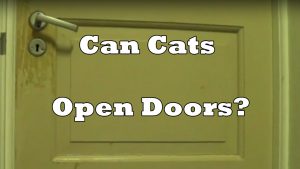 Open windows can be a real danger to cats, especially when that window is at a few meters height as is the case with bedrooms and other rooms in apartments and houses. While cats always tend to get on their four paws at a fall, high levels of falling can still mean damage to their body on the landing.

Recently we installed a cat flap on two places. The first one being in the hall in a door that leads to the cellar, the second one in the cellar window leading outside. In the future, this will be part of a locked-in outside area, but right now they are able to enter the entire neighbourhood. These cat flaps usually open with a simple push.

At night we tend to lock them inside. Those that are outside can still come back inside, while the ones inside stay inside. Apparently the locking mechanism isn’t Kira proof however. We thought she might have figured out the lock, but when I checked the next morning, the lock was still in place. She had simply pushed the door through the locking plastic mechanism past the lock. Now she and most other cats were able to get out. Freedom!

In some cases you might have noticed a cat opening a door with their claws and leg. We at least experience it a lot. You go to the bathroom and hope to be in peace, but didn’t actually close the door entirely. Suddenly a paw appears with a claw around the door. The door gets pulled away, the door opens and suddenly you are now joined by your cat. Usually cats need some form of attention when they join you on the bathroom.

In a completely different category go the cats that are amazing acrobats. These smart cats have figured that one doesn’t need fingers or a hand, just some gravitational body control and the use of paws and agility will get them out or inside with ease.

While I could link you all the video’s of other cats doing so, we actually don’t have to look far to find such an example. Our cat Kira is able to open doors herself. She does this with bedroom doors, living room doors and even the front door of the house. Many times have the neighbours been surprised and impressed by her acrobatic behaviour.

Check the below video of Kira Opening The Door In Acrobat Style:

Nowadays she and Felicia work together on an entirely different scale too. There are times when Kira jumps the door handle to open the door while Felicia pushes the door open. Other times she will help pull.

Most of the time it is Felicia and the “gang” of other cats, asking Kira to open the door for all the cats so they can get out of their “bad lockup position”. The result is that they either get out of the house through the flap door in the hall or surprise us on top of us in the bedroom.

I saw on YouTube similar cases where other pets were helping out. In some cases even the dog on the other side of the door that helped to push open the door for the cat. The cat went outside, while the dog got inside.

Can You Prevent Cats To Open Doors?

The best prevention is to not restrict your cat from any place within your house. That way they don’t need to open anything, because everything is already open. Naturally that is not something we all appreciate in certain areas of the house or on the door that leads to the outside world in unsafe areas.

There are some measures you can take, in case you want to prevent your cat from opening a certain door.

The easiest solution for doors not to be opened is to actually lock them. For example, our front door is at most times locked, because else if Kira is outside or inside and she wants to get out, she will open the door. At night this is a bit bad. Apart from the part that burglars have easy access, it is also the chance that cats that shouldn’t go outside get outside or the cats from neighbours could get inside.

Some people change the position of the door handle by 90 degrees. This might just help in your case if your cat doesn’t figure out how to open that one. I have heard though of people who did this position change and see their cat learn the new pattern of opening this door.

This is something we do at night when we want a good nights sleep. We lock our cats in the living room with their own mobile cat litter box. 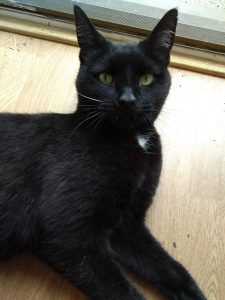 We usually obstruct the door with something heavy, such as jerrycans of water or cat litter bags.

There are certain ways of training your cat not to be interested in the door. This is usually a thing with doors that lead to the outside world while living in a city. Not all techniques are as cat friendly as others, but they might certainly work with a lot of patience and time.

I would rather find a way to lock the cat away from the places we don’t want them to enter. That way we keep it fair and nice for both cats and us.

Isn’t Kira amazing? Share your love and amazement for cats below!