Cat litter containers are used to clean up cat litter and dispose of it clean and easy. We’ve reviewed the Litter Champ and the Litter Genie earlier and today we like to shine a light on both of these containers to find a clear winner. 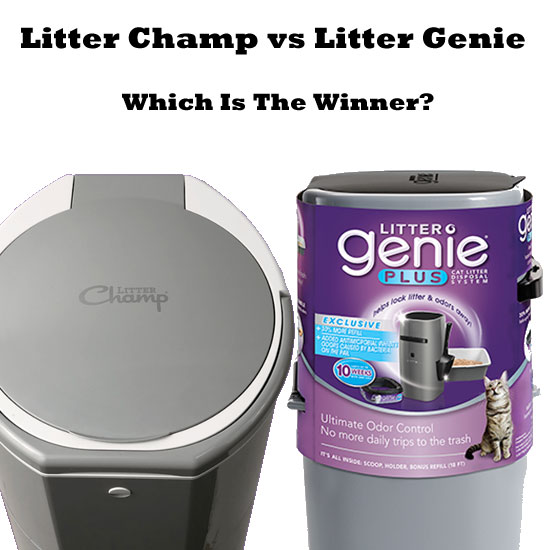 When scooping litter every day, you don’t want to take the bag out every day to the garbage container to dispose of the smelly substance. Preferably you want a designated container that you can use to dispose of cat litter, without having to worry about smells spreading throughout your entire house.

A Litter pail helps you in such way. You open the pail, empty your scoop of cat litter and close it again. The smells will stay within the pail. Now you can keep the used cat litter stored within your house, without having to go to the garbage container outside every time. After a week or two you cut the bag loose from the system, knot it up and dispose of it in your outside garbage container.

The new bag rolls down, you knot that one and another week of disposing of cat litter can start. It is that easy and it is of great help to those having one or more cats in their household. Cleaning a litter box has become as easy as that.

We reviewed the Litter Champ and the Litter Genie in the past months and saw clear differences between the two systems. Let’s find out what these differences are and whether they are important for you. We will give you our clear winner out of this review, but naturally by reading you can decide for yourself which one will be the winner for you.

The Litter Champ is a litter disposal pail just like the Litter Genie. The most obvious differences are the sizes. The Litter champ has a bigger housing and fits therefore a bigger amount of liters in the bag, before you have to empty it again.The Litter Champ has a way to close off the bag from the outside, by two toplocks. The first lock is opened through the pedal in the bottom (foot pedal) and the next one is below it and can be pushed open either by your hand or the scoop. The extra lid has also a locking dial to really stop smells from spreading. The Litter Champ also comes with a scoop that fits the opening of the top of the box.

This pail makes sure that you don’t need to use two hands to dispose of cat litter. You simply press the foot pedal at the bottom of the pail with your foot which opens the top lid. When unlocked, the inner lid will open by pressing the scoop down into it. All you need is one hand and one foot to scoop litter and dispose of it.

The Litter Champ is also one of the cheaper pails out there, going for a lot less dollars on the most popular selling places. The bag refill cartridges are also about the half cheaper than those of Litter Genie.

The big question remains of course what material quality you got on your hands for that little money. The Litter Champ itself seems well-built, but it has been reported by several that the inner top-lock mechanism wears out quickly. Luckily there is another top lid that potentially locks smells away.

Check Litter Champ out on Amazon

The Litter Genie, or Litter Genie Plus, is also a litter pail for cat litter disposal. This system has a way smaller size with only 30 liters of bag space. This essentially means that your pail gets faster filled up to the brim and you need to pay a visit to the garbage container more often.

The Litter Genie is a strong brand and is well-known all around cat owners space. With their name they imply they have invented a smart system to store litter.

Bigger brands usually also means bigger prices. The Litter Genie is one of the most expensive litter locking systems. Also the refill cartridges cost more than with the Litter Champ.

There are luckily people that have found ways around this, by using an old empty cartridge and a roll of new bigger bags. Check out these Litter Genie Hacks.

The Litter Genie however has a big plus over the Litter Champ. The Litter Genie comes with a litter locking mechanism that is quite similar to that of the Litter Locker pail. It actually closes the stored litter away from outside air while you are adding more used litter to the pail by a lever that you have to pull after dropping in the litter to let it drop down to the bottom of the bag.

Unfortunately is the quality of the Litter Genie as high as you would have hoped with a more expensive and well-known brand. The pail and its mechanics feel very flimsy. The pail has weak elements of plastic and it doesn’t seem to work quite as well as we would have hoped it would.

Check Litter Champ out on Amazon

All pails do in essence the same thing, they store away litter and try to keep the smells inside the box. Although the mechanics quite differ between the models, the idea is the same and also do they all come with a refillable bag cartridge. That what you have to look for when you are looking for a litter pail are:

For us there is a clear winner between the two. We were much happier with the Litter Champ, not because of the mechanics, but generally for two reasons:

We are however not too fond of the fact that cat litter smells still spread when we open the litter pail top lid to add more scoops of used cat litter. Therefore we are considering to buy the Litter Locker II as well. We have a rather big cat family, with cats that are in foster care. Preferably we have to have a litter pail with every cat litter box in our house.

Our decision and choice on the best litter pail is very personally based. You should really read the reviews and make up your own mind. What is the best cat litter pail to you? What are your definitions or requirements for a litter disposal system? Please share them below in the comments. I’d love to hear from you and I am glad to answer to any questions you got.