Cats are stars when it comes down to the positions at which they can sleep. To give you an idea of what they are capable of, we present you 7 cats sleeping at weird places.

How Can Cats Sleep At Weird Places (And Positions)?

You might find cats asleep on the weirdest places, but you will also notice that they are in the strangest positions.

You would never want to imagine doing such a sleeping position or sleeping location yourself. What makes it that cats can do these positions? Why can they sleep in these weird places without having some form of pain from it afterwards?

First of all cats have a very flexible spine. They simply don’t have a rigid collarbone to stop them from moving in strange ways. It allows them to enter the smallest and most narrow of spaces. As long as head and shoulders fit through, the rest will follow without any problem.

Making Use Of Thermal Heat

The way they are sleeping somewhere isn’t based only on their super flexible spine and organs, but also based upon their sleeping preferences.

Cats love to snuggle up to something warm that can either warm them up or keep them warm. While you would go under the blanket to stay warm, cats will even get very warm from laying on top of a blanket. They use a technique that we humans know by instinct (or army training). There is a scientific word for this, its called Thermodynamics. Cats have their own body temperature that will be given to a blanket or bed when they sleep upon it. This heat in turn will keep them warm while laying there cuddled up to the blanket.

1. Tiger Sleeping Strangely On Top Of Me 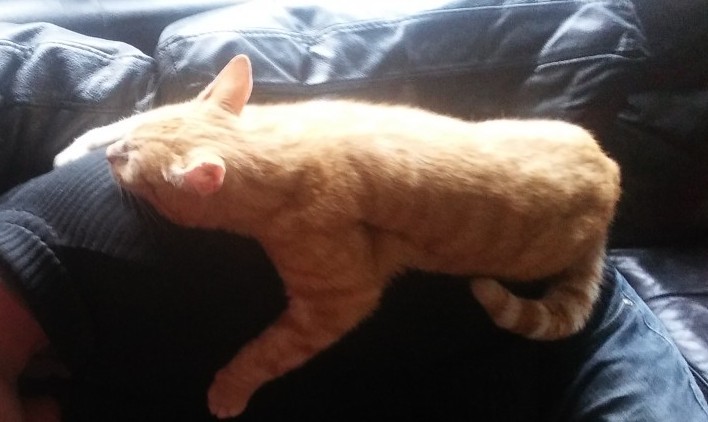 Cats love to sleep on top of their humans. Usually they do not sleep on total strangers, although humans that generally don’t show to pose a threat can easily be target of this behaviour too. Cats love to use the free heat of a body and know of the thermal heat system of two bodies sharing body heat. Tiger is warming me up here alright and so is he getting some nice body heat from my body.

I was by the way asleep when this happened and Tiger decided to lay himself on top of me using my rather tall body for his entire body. It is this way he also lies on the edge of sofa’s often with both paws along the sides.

We got plenty of photo’s of cats sleeping on laps or bodies, so let’s move on to a stranger position and place.

2. Migo On Newspapers In Basket 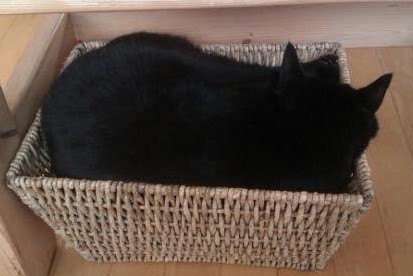 This basket is to be found under the table. It is usually full of newspapers that are either read or to be read as well as other magazines or a book. This cat named Migo (my parents’ house), loves to lie down on a nice insulated pile of newspapers. The basket, however too small for his big body, gives him a lot of extra comfort and prevents him from rolling out. 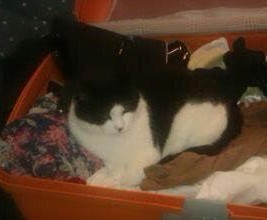 Nusse here lies in the packed suitcase. We were ready to go for a trip as it seems, or perhaps we just returned. Cats usually don’t like us traveling abroad and leaving them behind alone, even though there is a cat caretaker organized for them. This is the old Nusse that passed away in 2016.

Before I start crying again, let’s show you a picture of the new Nusse. The Nusse that returned to us with awesomeness and funny stuff. 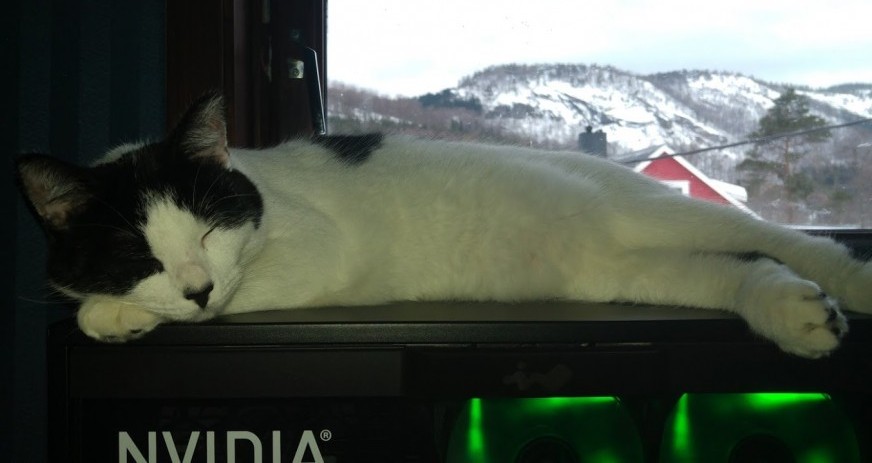 Our kitten Nusse, laying on top of Theresa’s PC. She sure loves the heat of a PC. Hmm.. but a PC has coolers. I am quite sure it was the heat of the heater in that room on that rather snowy cold day in April this year.

Mind you, she has grown lots since April and now is more of an adult full-grown cat than a kitten, but still acts like a kitten. Nusse is a proper I fits, so I sits kitty, that can sit on two hands or on the strangest of places all over the house or outdoors.

5. Kira and Tiger On Cupboard

Although we had Tiger already before on top of me, here is Tiger together with our cat Kira (the black one) on top of the cupboard. While Kira isn’t currently asleep, she was just moments before (and moments after) taking this photo. Did you notice how she is laying on top of a wooden frame? Did you also notice how they are both not laying in a cat bed, like the one right next to Kira.

We often see our cats get off their warm or hot cat beds and onto colder surfaces such as floors, metal or wood to cool off a little. This is especially true for times when the heaters or the wood oven fire are blazing hot all winter. 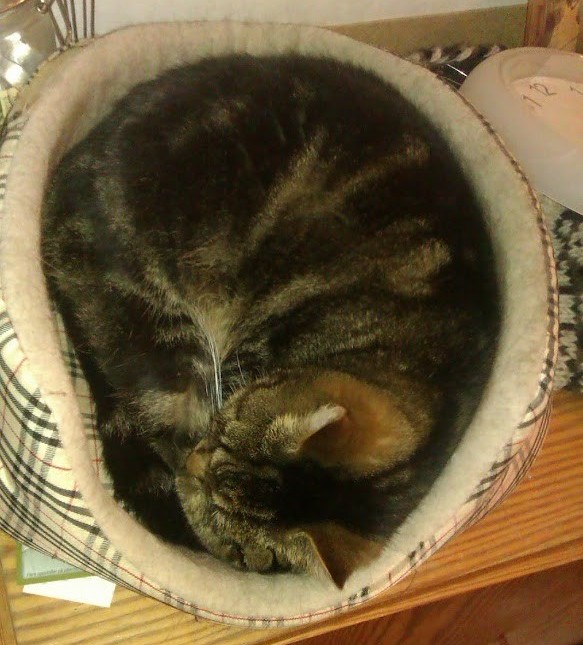 How Tabby actually managed to fit himself into this slightly undersized cat bed is a good question. He did however and he feels rather content and sleeps his hours he needs for the next adventure outdoors. He loves his outdoors and is often more outdoors than indoors, except for the winter time when he is a bit more to be found in cat beds than the white cold and wet snow outside.

Sometimes I wish I could curl up like he does. He is basically having his own tail in his face. I am 1.94m tall and can only dream of making myself small like that without breaking anything. 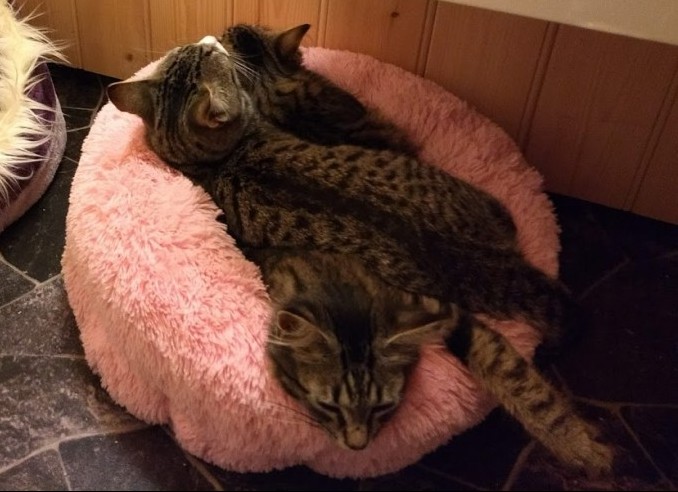 These three cute kittens we saved from being without mom, parents and out in the cold. We caught them using our traps in the beginning of September. It took us two days to catch them all. These three are so close to each other that they will even allow each other to be in the same bed.

They even will want to be all three on your lap when you go to the bathroom and anywhere else in the house. They aren’t the biggest of friends with our other cats, so that is why they are mostly in the bathroom in their own cat bed, near their water and food bowl as well as the cat litter box made for them. The floor is heated, so they won’t ever be cold either. What a luxury life a cat has at our place!

The following pictures are of our own cats that we have shown earlier in this article. They are usually to be found in several positions and locations during the day, so here are some other poses you can find them in.

Old Nusse In A Box 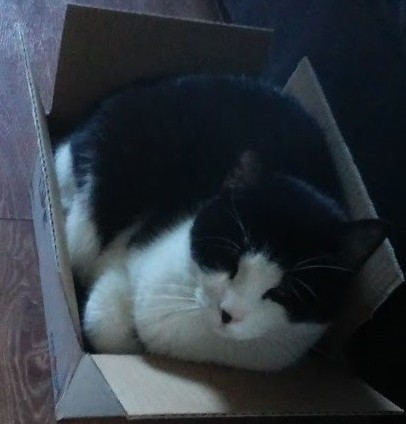 Cats really love boxes and our previous / old Nusse was no exception to that rule. Our new Nusse and many other cats do by the way still follow that trend. Cats rather have the box than the toy that came in the box by mail. This was however a rather small box for a toy, so I am guessing it was a cat box full of cat sweets. Now that it is empty, Nusse fits in it for a small nap. 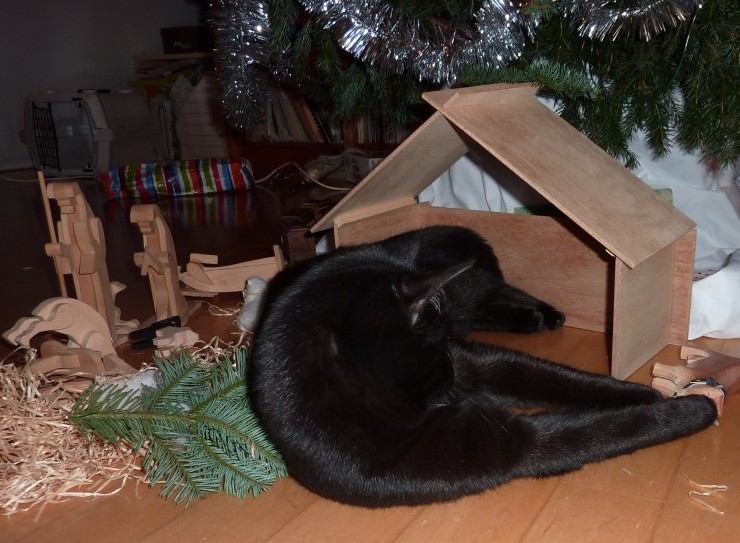 Migo enjoys Christmas just as much as we do, so it seems. He pushed out all the figurines and hay and made room for himself to have a nap, while being covered from rain, raging cat parents and those prickly Christmas Tree Needles.

Tiger Stopping Me From Working (Or Gaming) 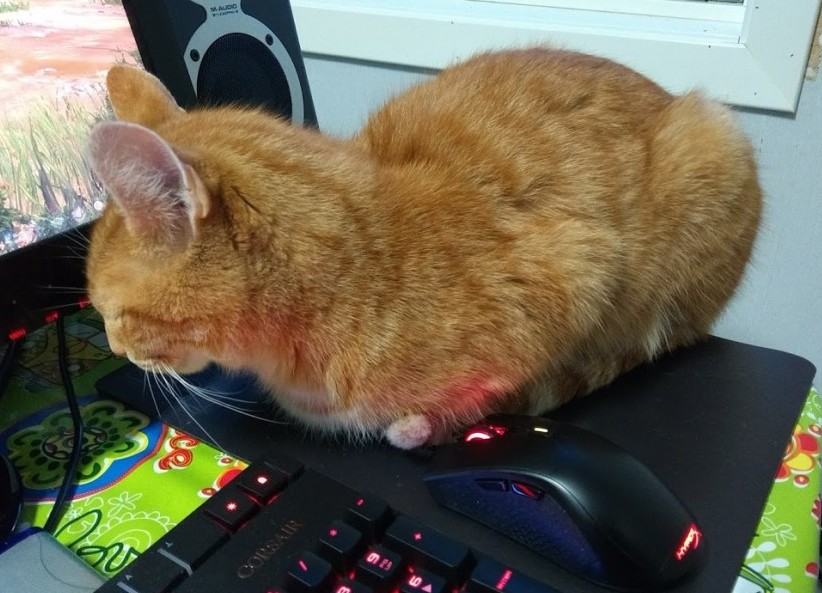 Cats are absolute masters of helping their cat parents with all sorts of tasks. Here Tiger is helping me with the game I am playing (or the review I am writing). Usually cats will sit right on top of the keyboard, but Tiger is nice. Kinda. He just sits on the cable cord of the mouse, making it impossible to move the mouse by an inch.

I had to lift him away from there before I could do anything again. Felicia is usually to be found on either my laptop or my keyboard when I wake up. I have to push her off in the hope her weight didn’t destroy my equipment.

Old Nusse On Top Of Me

Old Nusse sure knows where the body is warm and it is great to lie upon. Unfortunately she was really ill at the time this photo was taken. You probably don’t see this on her, but we see it after seeing all the photos of them.

This is ultimately the end of my long list of photos of cats sleeping at weird places and locations throughout our house. I will definitely update it with new positions might they come up.

I’d like to hear from you what positions and places you have found your cats to be in. Please leave them in the comments below.