Hi, my name is Nusse and I am a pissed off cat. My parents went for a four day trip without me! Here is my story.

My parents had gone on a mini holiday last weekend. They were leaving to England for a wedding celebration, but had no intentions of bringing me with on this trip.

In fact I did my best to go with, but it wouldn’t matter. I even tried to put myself in the suitcase, but I was quickly removed again before they closed the lid.

On the day of them traveling abroad, I even attempted to do a Felicia on them; I tried to run off outdoors while they had to go. It failed however and I was left behind with the other cat family members within the house.

There was plenty of food and water to enjoy though and many of my dear friends around. We even had a cat caretaker taking care of us every day while they were gone.

So in protest I decided to make a welcome home party for my dear cat parents.

At first I did use the amenities in the way they were intended, but over time I got more and more upset. Also the cat care taker wasn’t as good as my cat parents at keeping the cat litter box in perfectly clean condition.

Unfortunately the doors to the great outdoors were kept closed tight, even when the cat caretaker visited us. My cat parents had even taped it off with Duct Tape on both sid

es of the cat flap.

Duct tape is however not much of a match for us cats. We got sharp claws and sharp teeth to get rid of that tape in a matter of minutes.

In due time the litter box was so full that we ended up doing our toilet business elsewhere. I got so frustrated with the cat litter box, that I did my load right before the box.  A nice smelling production of which the smell now had been taken by the airco, making sure the entire house was smelling like it.

Together with the other cats we managed to open the first cat flap. Now the second cat flap was all that remained between stinky place and the great smelling outdoors. 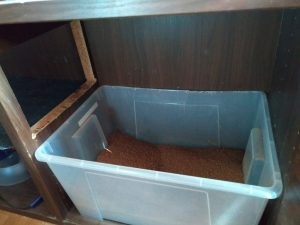 I intended to use the great outdoors for my next production, but unfortunately I couldn’t get out in time and peed on the floor in front of the door.

The cat caretaker took care of that by cleaning it up nicely with the best enzyme cleaner around.

Frustrated that I couldn’t get out, I went to look for something nice to eat. JACKPOT! I found a whole bag with lots of bags in it full of cat treats. I called upon my mates and rampaged the sweets stock. That will teach my parents a lesson for leaving us all by ourselves!

Urgh.. my stomach, it feels so bad. I ate way too many cat sweets. Moments later my stomach contents was on the floor. That feels much better, now I need to sleep somewhere.

After a nice sleep I felt much better again and wanted to eat some proper food. Unfortunately the food bowls were empty. Wait, what is that sound? Oh is the cat caretaker coming around for a refill? Perhaps this is my chance to escape the house! 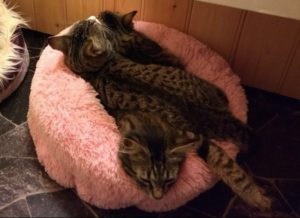 The cat caretaker was way too good at stopping us from running out. Luckily she came with food which I now really needed after I emptied my stomach. I ate my tummy full and went to bed.

Kittens In The Bathroom

Next day I heard noise coming from the bathroom upstairs. Through the small opening between the door, I could see a kitten sitting and looking curiously at me. I hissed at it and it ran under the bath! HAHAHA what a chicken! I mean kitten!

Did I hear a car arriving at our premises? Time to get to the door for the next chance of running out. Oh look, its my cat parents! Whoohoo! Freedom!

“Hey Nusse, nice to ..” before they could finish their sentence, I had ran out of the door. “Thanks for not taking me with! BYE!!”

After a good run around the house I came back inside. Mommy picked me up and made me do my favourite I fits I sits again. I licked her and them gave her a little bite. “Don’t let me alone like that again please!”