Now that better weather has returned, our cats are enjoying the outdoors more again. It has come to my attention they are also eating a lot of grass to than moments later puke it out again. Why do cats eat grass and vomit?

Why Do Cats Eat Grass?

Cats are known to be carnivores eating only meat and whole prey, so why would cats be eating anything plant-based such as grass?

The simple reason for cats to eat grass, is to be able to vomit.

Wait? That sounds weird for an animal race that is considered to be intelligent. So why would you eat grass only just to puke it out again? How does that even work?

Getting Rid of Hairballs

The reason cats eat grass and want to vomit it, is because they are actually (pretty intelligently) trying to remove hairballs from their stomach. This excess hair is entering their system, because of grooming. As hairballs can potentially cause harmful blockages and cannot be digested by the stomach, the best way to get rid of hairballs is through where they entered from – the mouth.

How Does Grass Make Cats Vomit?

Grass has a very itchy texture with sharp edges on the leaves, that itches their throat lining as well as the stomach lining. This itch will make them try to purge their stomach. The second reason is that cats do not have the enzymes to digest grass. Therefore, the stomach will send a signal about this and the cats brain than sends a signal to get rid of the grass again through vomiting.

Grass does have some nutrients though, as they do give vitamin B and some other minerals and vitamins to the cat. The question remains whether the cat eats the grass in need of vitamin B, while stimulate the purging of hairballs or whether they choose to eat grass solely based on the vomiting.

What I am trying to get here is that do cats:

A) Actually know they need to eat grass to get rid of the hairballs in their stomach?

B) Eat the grass because they feel like having the need for vitamins, which is found in grass?

Both A and B leads to puking / purging the hairballs or stomach contents, but there is an intelligence difference there. B is more about nature taking care of itself, purging through vitamin need (instinct), while A is more of an intelligent approach to purging.

This week we have been doggy sitting for a dog of the family. Dogs do also eat grass and this is not just because of possible nutrition. Dogs also purge hairballs and other stuff that upsets or doesn’t belong in their system through purging/puking. 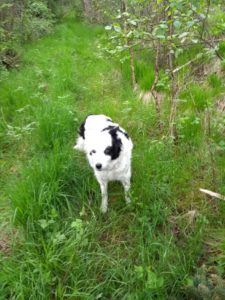 Now I am not a dog expert, but from what I understand, dogs also groom themselves and hence they will also ingest a good amount of fur. Similarly, as with cats, dogs cannot digest nor pass the excessive hair in the stomach, so puking is the only solution to get rid of it.

Our cats love Spring and Summer. It is also the time that the snow disappears and all sorts of prey appear for them to catch. It is often said that cats that get fed a well-balanced diet, do not have the need for additional prey hunting and therefore often don’t eat their prey.

Our experience however, tells much of a different story. Our cats do bring their prey home, but they do only so to help feed us and show appreciation for our care for them. After we have said our thanks for the caught mouse or bird, the cats usually devour the prey whole moments later.

First of all, our cats actually don’t eat their prey whole. They eat most of it. There is one part they somehow manage to leave behind.

I should really film this one day (however cruel to see a cat eat prey, we could learn a lot from that on film).

It could be a stomach or something inside the stomach. It could be the whole gut system. I am not enough of a biologist to know what part of bird or mouse I am actually looking at.

The more interesting part of this whole catch prey and eat it is what happens sometime later that day. Cats do actually also often puke the caught and devoured prey a little later that day.

Was this food too much? Did they feel they ate already a well-balanced diet and couldn’t keep the prey in too?

First of all I don’t think that cats really care about too much food or not. They know from the old-times or rather called instinct that they should eat whatever they can get when they get it. Usually you didn’t get food served in a bowl as a cat. You usually had to work for it and hunt prey. When a cat finally caught something, they ate it, for “you never know when the next mouse or bird turns up on your plate”.

This is than also the number one cause of obesity in cats that get free fed. The food bowl is after all always filled and so your cat no longer has to worry about whether there will be food or not on their plate. The cat instinctively still thinks to eat when it appears, so cats that have access to food all the time have a bigger potential of becoming obese.

NB: Bigger potential, doesn’t mean that all cats that are free-fed will become obese.

I am a bigger believer that there is something much different and less well-documented going on in here. Similarly to the grass having the necessary vitamins for the cat, I believe that also the way that prey are eaten and purged have a deeper meaning here.

Where is it that vitamins and mineral uptake is taking place? Possibly already in the throat, but most definitely in the stomach. So here I was wondering whether the mouse or bird that was eaten whole gets a little “treatment” in the stomach, before it gets purged out again. So the time between a cat eating a prey and purging it, might be all the time the cat needs to actually do something with all that food in the stomach. The meat is dissolved, all the stuff that the cat’s body needs is extracted and the rest, the carcass is than purged. In this same way it goes with the grass, for we also find grass in their puke, often covered by stomach acid.

This makes me wonder whether the removal of hairballs is just one part of the equation. There seems to be much more going on than that we humans have so far acknowledged.

Would love to hear your opinion on this! Be sure to share it below