Originally we had Nusse from 2008 together with Kira from a RSCPA project. Sadly she passed away in December 2016.

In June 2017 we were reunited with Nusse. She joined us as a kitten, but has most of the characteristics of the ‘old’ Nusse. She’s been growing up quickly. It is always amazing how a young kitten can grow up so quickly. She resembles much of the old Nusse both in character and colours. Nusse is now about 6 months old and is growing and growing. We are not letting her outside anymore, because she needs to be spayed first (she loves going outside).

History of the “old” Nusse

Nusse and Kira are two (thought to be sisters) cats that we adopted from the RSPCA after taking care of them for a while in 2008. Nusse and Kira loved to lay next to each other cuddling up. They also played and fought together. They did everything together. 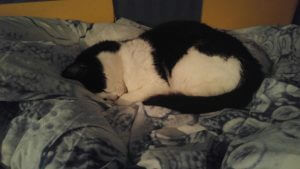 When they both were nourished back to health, they became less and less together. This is a cat behaviour we often see. As Nusse and Kira were undernourished, left alone in the cold without access to food and water, they developed some chronic health issues.

Nusse developed chronic bronchitis and had a discolouration in one of her eyes. For us this meant we had to be extra careful when she caught a cold, keeping her inside and taking care. As I mentioned before, we got her to a better state of health and she loved to be both outside and inside.

Nusse is a cat that wakes you up with a punch in your face to get what she wants. She was the big sister to Kira defending her from all the other cats that posed a threat.

She is also the cat to cuddle up to you when you are feeling ill or sad. Cats have this extra sense, to feel and know when something is wrong. It is said that cats can heal with their heat and their purring. Nusse loves toys with catnip in it.

Unfortunately, last Christmas 2016 a tragedy happened. She was getting suddenly weaker and weaker. The doctor diagnosed her with Acute Kidney Failure. It is unfortunately a common cause among cats for their passing.

In our desperate hopes that we could do anything for her still to make her live longer, we made an appointment with a clinic but didn’t get any appointments in Christmas. We neither did really realise how far the disease had developed itself, there really was no saving here.

We barely had a Christmas celebration with family (they were there though), as we were running after poor Nusse with food bowls and water. It was an awful experience, but we wanted the best for her.

She passed away on the early morning of the 27th of December 2016 in Theresa’s arms supported by Steven and a friend that stayed over.

We do believe that she has wished to return to us, so there is the hope that we will be reunited with her in the near future. This is then also why she reunited with us in June 2017 (born April 2017).