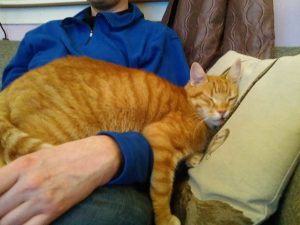 Tiger, a red boy, was born at a farm with many brothers and sisters. Most other kittens were given away to people. Tiger remained as he was a bit of an **sh*le. Theresa met with him and liked his character and decided to adopt him.

Her mother was less pleased to adopt another cat, but as she neither wanted the cat to be killed, they took him in anyway. As you can understand Theresa and her mother are animal lovers and have been saving many animals before.

Tiger is the type of cat you should be careful with and read his body language when you decide to cuddle him. He will warn you if he is not in the mood. Unfortunately for many humans this is a problem – they are unable to read his early warnings that he is not amused with it. At some point he slashes out. In most cases though he gives just a warning jab, but for the average human this is a fearful experience.

We know about his warnings and so we never ever get hurt by him (anymore). There is some behaviour of him we do not enjoy however. This has to do with marking territory and showing his temper. Whenever he is pissed off with us being too slow opening a door or another cat has annoyed him, he will piss on something.

Our remedy is that we for now have to let him live outside when we are gone for a weekend, or during the day when we have to drive somewhere. The plan is to build a Catio for all our cats to enjoy and several cat doors. One of the cat doors will have a chip reader that will enable Tiger to get outside of both house and Catio.

We also have found our remedy against cat piss and other unpleasant smells in the house.